Stop Londoners from leaching our oil, gas and green energy.

Please use the form provided below for getting in touch and let us know how you can help.


At www.oilofscotland.org we strongly believe that coordinated people power will overcome the Unionist media machine. A media machine that spins lies and smear campaigns to prevent Scot's realising the truth of their oil and green energy rich economy.

A Scotland managed by Scot's opposed to leaching Londoners would have the future opportunities. The rebuilding our heavy manufacturing industries. The promotion and effective regulation of our tourism, IT, banking and telemarketing industries. Besides creating enough green energy to supply a quarter of Europe.

If you can help spread this message together we can undo the injustices inflicted on Scotland. Read about the Scottish Press and Institutions that operate in Scotland.

The latest injustice being Westminster not allowing the first minister of Scotland to officially attend the Copenhagen summit, when the previous Labour first mininster Jack Mc Connell attended such meetings. Unless he was too busy to attend due to playing golf with Prince Andrew.

Not persuaded ? - download and read the top secret McCrone report

Posters
You can also put your printer to work by printing these posters (on left hand side) which can be displayed in pubs, clubs, fast food shops, local newsagents, garages, bus stops, train stations, the back of public toilet doors, schools and polling stations.
Leaflets
You can also print these double sided leaflets on your desk jet printed which can be cut down and put through the letter boxes of know Labour voters.

The purpose of this site is to help you understand and e-mail awareness of;

into the "chronic surplus" of Scotland's economy

In 1999 Westminster secretly made 6,000 MILES of SCOTLAND'S SEA - ENGLISH
by moving Scotland's marine boundaries from Berwick-up-on-Tweed to Carnoustie

In the 1979 devolution referendum 52% of voters said YES as did 43 to 19 Scottish MP's, The Labour Party undemocratically said NO!

Scotland gets NO Oil Revenues - Scotland is funded, only by some population taxes.

Scotland could build 2 High Schools or 16 wind turbines or 300 stream turbines or 256 two bedroom houseS with a single day's Scottish Oil revenue, if the Scot's did not give it ALL TO LONDON.

An Independent Scotland could be free of its £62.5 billion share of Gordon Brown's debt in less than 5 years. Alternatively have a look Gordon Brown's track record on this short video

Scotland like Norway could have built up a £259 Billion sovereign wealth fund, retained its manufacturing base and avoided Scotland's £62.5 billion share of the London Government UK's debt of £175 billion.

North Sea Oil will last for another 100 years according to industry anaylists.

A new oil and gas field in West Shetland is now to drilled for 176 million barrels.

The Union lost every Scottish resident £48,000 over the last 30 years.

Staying in the Union could cost every Scottish resident £234,000 each.

Labour want to rebuild Scotland's nuclear plants when uranium is unlikely to last 30 years. Scotland no longer wants to be a nuclear dustbin for any Countries waste.

Scotland could provide enough Green Energy to supply a quarter of Europe. Attracting
companies to relocate to Scotland in exchange for low cost energy. However Westminster is unfairly charging Scotland for supplying green energy.

The banks are now in a position where they could lend to 600 Scottish farmers / land owners money to provide small high stream hydro schemes, that would generate 54% of Scotland's power requirements.

Westminster wants to keep the American's sweet by renewing Trident, whilst Trident Submarines have now leaked untreated nuclear waste into the Loch 3 times at Faslane

Scot's do not want to be forced to pay the £100 Billion bill for replacing Trident.

250,000 tonnes of low radioactive Olympic waste to be dumped in Falkirk

Voting for the London controlled Scottish Labour Party is a vote against Scotland ! 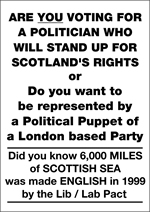